THE OFFICIAL SITE OF THE

Attention Junior Watchmen! Knight Watchman The Golden Age is in the works as a trade format collection from PULP 2.0.

THE SPHINX – Mysterious Adventurer from a Realm Beyond Imagination! Created by Jeff Weigel and part of the BIG BANG COMICS COLLECTION! Who is The Sphinx? Adventurer? Entrepreneur? Mankind’s Saviour? That’s been the question on everyone’s mind since PETER CHEFREN appeared out of nowhere and saved countless lives with his daring spirit and almost magical technology…

But who exactly is THE MYSTERIOUS SPHINX? Find out as PULP 2.0 collects all of his adventures together with exclusive bonus material on this multi-dimensional mystery man.

Direct from the BIG BANG COMICS COLLECTION comes the Graphic Novel Beyond Imagination!

From The Big Bang Comics Collection comes this tribute to one of the greatest “girl comics” of all time – THUNDER GIRL! Chosen from among all others by the immortal Mother Nature, young Molly Wilson has been entrusted with the very forces of the universe in order to right wrongs, and seek truth and justice for all. In times of dire need, young Molly has the power to call on these forces of nature with the utterance of a single magical word: ALAKAZAM! A word that transforms the shy young orphan into the “Strongest Girl in the World,” THUNDER GIRL!

Now – armed with the flight of an eagle, the wisdom of an owl, the strength of an elephant, eyes of a hawk, and skin as hard as a diamond – Thunder Girl fulfills the destiny Mother Nature saw for her as a champion of Peace and Justice. This Pulp 2.0 edition features all the Thunder Girl stories together for the first time along with bonus features that go behind the scenes of the history of Big Bang Comics and its Maid of Magic.

Included is a tribute to the artist who made Thunder Girl great – Bill Fugate who passed away in 2013.

The graphic novel from the acclaimed Big Bang Comics mini-series originally published by Image Comics in 1998. This is the gripping story by Chris Ecker, Gary Carlson with stark, atmospheric, film noir-ish artwork by Ben Torres. It’s been five long years since the Knight Watchman prowled the streets of Midway City… Now the city is under siege, and the streets are deadlier than ever before… But so is he.

On the heels of an assassination attempt that leaves the Mayor in a coma and the city’s hero, GALAHAD, in traction; THE KNIGHT WATCHMAN ends his retirement and returns to the streets to keep the city from falling further into chaos. However, chaos is exactly the plan orchestrated by the Knight Watchman’s arch enemy, PINK FLAMINGO. The master criminal has taken over the city government by installing Deputy Mayor PRINCETON into office, and unleashing the dirty cops on his payroll. When a mugger turns up dead and the evidence points straight at the Knight Watchman, Midway City’s former hero becomes its most wanted criminal. This edition from Pulp 2.0 features the gritty, urban superhero storytelling that was a hallmark of the 90’s, and reinvented one of the founding heroes of the Big Bang Universe.

This edition is complete with bonus features making it a must-have for all comics fans. 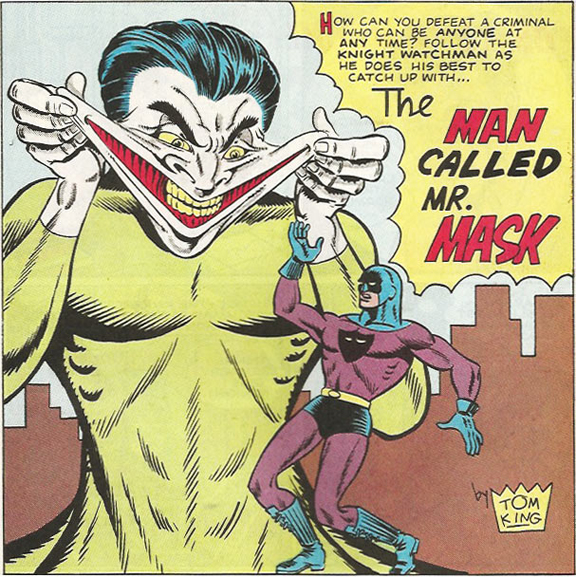 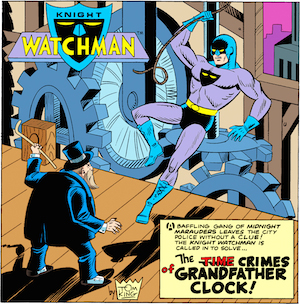 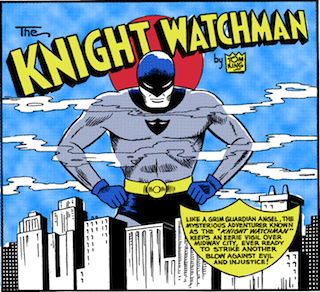 History: Kid Galahad was groomed from a young age to fight crime and the Kid Whiz dedicated his life to that pursuit. Along the way, he passed on some of what he learned to other youthful crimefighters as the leader of a team that became known as the Whiz Kids. He spent some time in New York City studying with an aged master of Japanese martial arts.

Galahad dropped the “Kid” from his name when he entered college and left Midway City. Yearning to not only stop criminals but to see them locked away, Jerry studied law. After graduation, he returned to Midway City to work for the District Attorney by day and patrol the streets at night as Galahad. The demands of two full time jobs stretched Jerry to the limit and when the time came to make a decision, Galahad won out.

Inspired by Ultiman’s example, Galahad vowed to become a symbol of hope for the citizens of Midway City. Leaving the “night shift” to the Watchman, Galahad began operating during the daylight hours to become a visible presence in Midway. He worked with the police and the FBI, fighting not only crime but also corruption.

Meanwhile, Jerry became a corporate lawyer and a partner in the family business. He married his long time girlfriend Maggie and they bought a large mansion on Midway City’s famed Platinum Coast. Once owned by smugglers, Jerry converted the secret basement into the Dungeon, his own version of the Watch Tower.

Over the years the Watchman and Galahad fought crime individually and as a team. Galahad replaced his mentor in the Round Table of America and came to be regarded as the team leader by even the older members.

The Knight Watchman retired in his mid 50s, still in peak mental and physical condition, but age was catching up to him. Confident in Galahad’s abilities, Reid devoted himself to his career as an international fashion designer and to running the family financial empire.

Noting an increase in crime after Reid’s retirement, Jerry often adopted the Knight Watchman identity to patrol the city. In this way he could strike fear into the hearts of criminals by night and offer hope to the city by day as Galahad, the White Knight.

Earth B: Knights of Justice

Earth A: Round Table of America

Base of Operations: the Watchtower, Midway City, Earth A

History: College student and Olympic hopeful Reid Randall was called home to Midway City when mobsters attempted to take over the family garment business. His older brother Ted and his wife Janet were killed by a car bomb and Reid vowed to avenge their deaths, deciding that the whole warehouse district needed a guardian to protect it from the mob.

Wearing a simple homemade costume and mask to protect his identity, and using his athletic skills, Reid defeated the gang single-handedly. He dressed his downed opponents in women’s clothes and left them tied up for the police. During the fight, one of the gang had referred to Reid as a night watchman. Recalling how his mother had referred to him as her “knight in shining armor”, the Knight Watchman was born to protect the innocents from criminals.

The wooden water tower on the roof of a warehouse became the Watch Tower, where the Knight Watchman began his nightly vigil over the city. The building below was the real secret headquarters, housing a laboratory, training area and the garage which housed the motorcycle known as the “Iron Horse” and later, the high performance automobole known as the WatchWagon.

Reid’s nephew Jerry Randall soon entered the war on crime, claiming that “every knight needs a squire!” A knight in training, Jerry adopted the guise of Kid Galahad and together the two became the terror of the Midway City underworld.

Midway City was the most dangerous and corrupt city in America, run by mobsters who had fought a continual gang war for control since the Great depression. But instead of simple mobsters, the Twlite aces were soon facing Mr Mask, whose disfigured, clay-like face could be reshaped to look like anyone else; former game show writer the Quizmaster; the rotund, top-hatted Grandfather Clock; and the sinister, smiling Pinkerton Fleming, a.k.a. the Pink Flamingo.

Aside from Galahad, the Knight Watchman’s closest friend was Ultiman. Known as “the World’s Best Friends”, they shared many adventures together and with the Round Table of America, an assemblage of America’s best & brightest heroes which they established at the request of President Kennedy.

Welcome to the brand new website of the Knight Watchman!

Don’t forget to click on the links to our web comics to learn all about the Twilight Paladin.

Gary Carlson wrote and published the independent comic book MEGATON during the 1980s, which helped usher in the do-it-yourself black & white comics boom of that decade.

MEGATON is remembered as a training ground for comic book professionals. Erik Larsen, Rob Liefeld, Angel Medina, Gordon Purcell and Jackson Guice are among those whose first professional assignments were for Carlson. MEGATON was also the first home to such Image Comics characters as Erik Larsen’s SAVAGE DRAGON, Rob Liefeld’s YOUNGBLOOD and Larsen & Carlson’s VANGUARD, which later prompted Liefeld to dub Carlson the “Grandfather of Image Comics”.

Carlson has also written various VANGUARD mini-series, back-ups and one shots for Image, where he also scripted MARS ATTACKS IMAGE and wrote SUPREME, TEENAGE MUTANT NINJA TURTLES volume 3, as well as BIG BANG COMICS, which moved to Image Comics in 1996. He has also co-written AQUAMAN and NOVA with Erik Larsen.

He also has 30+ years of experience in the graphic design and prepress field.

Have you enjoyed today's FREE Knight Watchman adventure?
Please feel free to let us know by leaving a small tip for the creators.
Thanks! The Big Bang Gang

CLICK IMAGE BELOW TO FIND OUT ABOUT BUYING ORIGINAL ART: